Mistakes You Don't Want to Make With Flange Fittings

It is important to note that the two flange fitting style codes (61 and 62) are not interchangeable due to their pressure ranges and their different bolt patterns. As 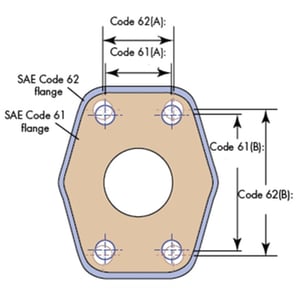 shown in this diagram of overlapping code 61 and code 62 4-bolt flange fittings, the dimensional placement of holes are close, but not identical. Note the difference in the bolt-hole’s center-to-center dimensions.

As shown in the flange diagram and chart below, the distance between hole centers for dimension A in a 2 inch Code 61 versus a Code 62 flange varies by as little as 0.062 inches and for dimension B is offset by a significant 0.75 inches.

There is also another style that must be accounted for and not interchanged with Code 61 or 62 flanges. This other 4 bolt flange fitting often found in the field is made for Caterpillar equipment and called (not surprisingly) a Caterpillar flange fitting. This style is almost an exact match to the SAE Code 62 4-bolt flange with one major difference:

Although many SAE 4-bolt hydraulic flanges might look alike or different flanges and fittings might appear to be compatible, that is usually not the case. SAE Code 61, SAE Code 62 and Caterpillar 4-bolt flanges have dimensional variations and slight differences in configuration, plus the differences in allowable working pressure do not allow them to be used together or interchanged. Take the example from on the The Fluid Power Safety Institute™ website:

A diesel mechanic was installing a new hydraulic motor onto a machine. While reconnecting the hydraulic hose he inadvertently used a 4-bolt split flange that did not line up with the holes on the motor housing. Suspecting the holes in the motor were not tapped in the proper place he filed the holes in an attempt to have them line up with the flange. He essentially modified a 6,000 PSI SAE Code 62 4-bolt flange to mate with a 3,000 PSI SAE Code 61 motor.

This was an unfortunate mistake and one that could have been catastrophic to the system if it had been the other way around; modifying a 3,000 PSI bolt flange with a 6,000 PSI motor. An obvious system failure would have occurred, or worse, a system failure that blew the assembly off causing severe damage or physical harm. This is a prime example of the importance of using only matched and properly rated components.

This blog is an excerpt from our latest whitepaper, The Major Advantages of Flanges and Flange Fittings.

You can also view our product collection on our website by clicking here. 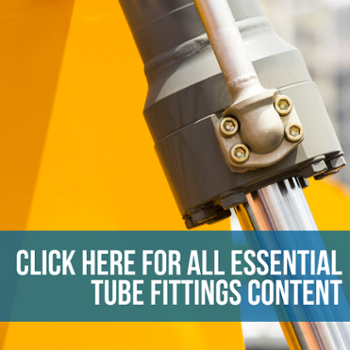