Identifying the Components Within an Aircraft's Hydraulic System 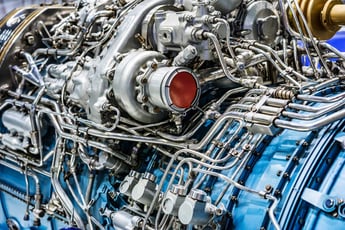 Though the same basic components in a hydraulic system are typically used across most aircraft, from a twin-engine Cesena to a Boeing 787, the hydraulic system design will vary depending on the size of the aircraft and the complexity of the application.

There are many different applications for hydraulic systems in aircrafts. And in most cases it is necessary to install redundant systems to ensure continuous safe operation in the event of hydraulic system failure.

The primary components in a hydraulic system within aircraft are:

Actuating Cylinders – comprised of a cylinder and piston where hydraulic pressure is converted into work. As an example, according to the pilot’s control inputs actuating cylinders operate the positioning of the flaps of the aircraft.

Fittings – connect hoses, pipes and tubes in the system and typically operate under high pressure. Hydraulic fittings for critical aerospace applications must adhere to strict standards which determine the fitting type, orifice dimensions and pressure ratings.

Heat Exchangers – maintain the temperature of hydraulic fluid in the system.

Hose, Pipe and Tubing – are also critical components of hydraulic systems, they transmit the fluid from the pump to valves, actuators and motors, which in turn produce the force and motion that operates the system.

Pressure Relief Valves – protect the system from dangerous over pressurization.

Pumps – generate the power that pressurizes the system.

Reservoir – a tank that stores hydraulic fluid that is used by the system.

As suggested above, a primary advantage of hydraulic over pneumatic systems is that hydraulic fluid does not become vulnerable to compression, where a pneumatic air system will compress under changes in climate and pressure. This is particularly critical in aircraft due to the dynamic pressure changes that occur during an increase or decrease of altitude.

The ability of strict control over the aircraft is vital to its safety and accuracy. Hydraulic systems have a very quick response time and must be highly efficient for input controls. In critical flight circumstances, hydraulic systems provide the necessary functionality to allow accurate flight control functions.

With regard to military aircraft, there are many specialty applications for hydraulics, including gun drives, hydraulic-motor-driven-fan heat exchangers and weapons-bay doors.

Learn more about fittings, get industry insights and read our latest resources in Brennan University. Also, you can read our essential aerospace content here.