Posted in
Push To Connect, D.O.T.

Foundation brakes are the most common air brake systems in trucks and buses. They use a triple-valve principle which charges air into the tank, applying the brakes, and releasing them. Pressure increases in the cylinder while applying the brakes and in turn decreases pressure in the reservoir. The majority of the vehicles with air brakes have a graduated release system which allows a partial increase in pressure that delivers a proportional release in the brakes.

The components listed below make up a foundation air brake system in trucks and buses: 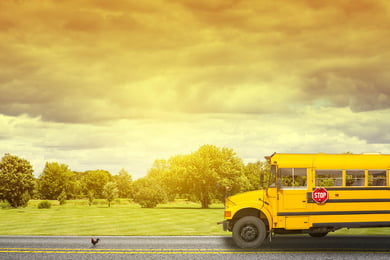 Air compressor governor: Maintains a set amount of air in the tanks that is coming from the compressor

Drain valves: Release valves that drain air from the tanks when the vehicle is not in use, keeping the tanks from over-pressurizing

Brake pedal: Essentially a valve that when it is depressed, air is released from the reservoir tanks
Brake chambers: A tube-shaped vessel which contains a slack adjuster that moves a cam or diaphragm device

Push rod: A steel rod that attaches the brake chamber to the slack adjuster. When extended the brakes are applied, if depressed the brakes release.

Slack adjusters: An arm which attaches the push rod to the brake s-cam for regulating the distance between the brake shoes

Brake S-Cam: An S-shaped cam that is a rotating or sliding piece in the mechanical linkage used to transform rotary motion into linear motion that pushes the brake shoes apart and presses against the brake drum

Brake shoe: The part of a braking system which carries the brake lining that creates friction against the brake drum

Return spring: A small rigid spring that is linked to each brake shoe which returns the shoe back to the open position when not depressed.

This blog is an excerpt from our whitepaper, D.O.T. Push-to-Connect Fittings: Safety on Our Highways. Click the link below to download your free whitepaper! 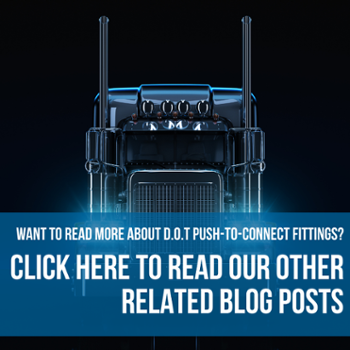