Posted in
Fittings
Hydraulic fittings with metric threads are the most common connectors worldwide. The three primary styles used in different regions and by specific OEMs are:


The Various Styles of Metric Fittings

Setting aside BSP and BSPP threads, in Europe and other regions, metric DIN 2353 and ISO 8434 threads are found in standard tube compression fittings with a 24-degree cone connection. The metric thread of the DIN 20078 series also incorporates a 24-degree cone, while metric DIN 7631 has a 60-degree cone in hydraulic systems. Metric DIN 74234 and 74233 fittings have a 45-degree cone. 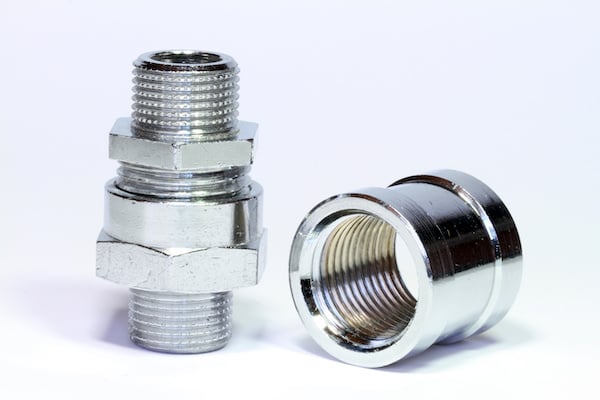 The Japanese metric thread of Komatsu fittings have a 60-degree flare for hose adapters, following the JIS B2070 specification. Typical in France, Japanese-owned OEM Kobelco French G GAZ fittings have a 24° sealing surface with metric straight threads. They are similar to German DIN fittings. Though the French G GAZ have fine threads in all sizes, German DIN fittings use standard threads in the larger sizes.

Metric fittings have either parallel or tapered threads. Metric parallel threads utilize a variety of methods for sealing connections. As with other fittings, a parallel thread in a port application usually seals at the top of the thread with an O-ring or other seal. The O-ring is reinforced with a back-up washer and nut for correct orientation of the connection. A leak-tight seal is created as the O-ring is compressed when mating the male and female (or port) connection. For example, British threaded JIS B2351 and Metric ISO 6149 both have O-ring elastomeric seals at the base of the threaded connection. Comparatively a tapered thread fitting simply seals with wedging of the metal-to-metal threads. Additionally, the O-ring seal in the JIS B2351 thread port provides good vibration resistance in construction and frequently actuated industrial machinery. They are also often used in the sealing port of Japanese hydraulic fitting studs.
To identify metric threads, follow the steps below to ensure you’re making the right connection:

The Practicality of Metric Threads

You rarely have a choice between using Imperial or metric threads in maintenance. You often must use what the OEM specified. However, though there are different styles of metric threads, they are more advantageous than Imperial for many practical reasons.

These are just a few benefits of metrics that can add to long term cost savings in design, manufacturing and assembly, as well as the service life of many components.