Why Are Air Brakes the Safest Option for Commercial Vehicles?

Posted in
Push To Connect, D.O.T.

For the safety of our roadways, air brakes are the most important component of commercial motor vehicles. The braking system on semi-trucks, large straight trucks, garbage trucks and school buses use compressed air to push the brake shoe lining onto the brake drum creating friction to slow the vehicle. That may not seem very complicated, but it is. The system to slow down a vehicle that may weigh 80,000 pounds fully loaded is not only complicated, it’s critical. Air brakes have to work effectively every time and they must be adequately maintained.

In 1980 a 40 foot straight truck moving van with a deck over the cab was on route to the customer’s house for unloading outside of Syracuse, New York. The truck had an 11,500 pound tare weight and was carrying 20,000 pounds of furniture (that’s a total weight of 31,500 pounds). Coming off the highway down a steep ramp the driver was frantically pumping the brakes. There was a tee at the bottom of the ramp with the option to only turn right or left. Straight ahead was a 5 foot tall earthen embankment, over that was a 20 foot drop to railroad tracks, and past that was another drop to a river.

Continually picking up speed and only seeing the embankment ahead, the driver cranked the steering wheel for a right-hand turn. The passenger side was completely up off its wheels, the 40 foot truck seemly flew through to the right, laid over on its side smashing onto the road facing the direction of the right turn as the top of the truck slammed into the earthen embankment, lying on its side in the road. Facing the correct direction, but not on its wheels. Going straight would surely have crushed the cab into the embankment, killing the driver and passenger; then would have flipped over and tumbled down to the railroad tracks and possibly tossed and turned all the way to the river below.

Fortunately the driver and passenger were not seriously injured, yet all of the furniture was destroyed. The moral of the story . . . the air breaks had not been properly maintained.

In 2009 a long awaited mandate from The National Highway Traffic Safety Administration (NHTSA) issued new braking standards for commercial trucks, requiring that a tractor-trailer traveling at 60 miles per hour must come to a complete stop in 250 feet. That was a dramatic, but necessary, change from the previous standard of 355 feet, reducing the required stopping distance of a truck by 30%. Had that standard and today’s technologies and regulations on maintenance of air brakes been in place in 1980, the furniture truck would likely not have crashed.

Why Air Brakes are Used on Commercial Vehicles 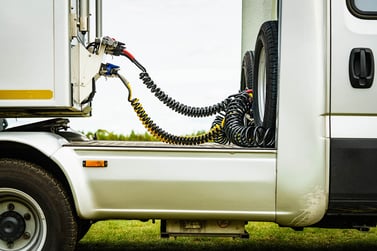 As the name implies, air brakes rely on air since there is virtually an unlimited supply in the atmosphere. Therefore, unlike hydraulic brakes that rely on fluid that can be depleted or leak, if properly maintained, air brake systems will never be depleted.

Excluding the engine, air brake assemblies are one of the most complex systems found on any type of commercial vehicle. They are used on tractor-trailers, many larger straight trucks, school buses, fire trucks and even trains. Air brakes are the best method for safely stopping heavy vehicles, and they are more complex than hydraulic brake systems used on lighter vehicles. Since people interact with vehicles that use air brakes, from mechanics to drivers, it is extremely important to understand how they function and their potential limitations.

Air brakes were initially invented for trains by George Westinghouse in the late 1800’s. When proved to be successful in railroad applications, truck manufacturers began incorporating them. They are safer and more reliable than hydraulic brake systems on commercial vehicles due to:

With a hydraulic brake system, if the fluid is depleted the brakes will not operate likely causing catastrophic danger to life and property.
Brake assembly components are often referred to as foundation components because they are the primary sections the rest of the system is built on. Foundation components are the mechanical parts in and around the wheels which operate the air brakes.

This blog is an excerpt from our whitepaper, D.O.T. Push-to-Connect Fittings: Safety on Our Highways. Click the link below to download your free whitepaper!